1 The earth is the Lord’s, and everything in it,
the world, and all who live in it;
2 for he founded it on the seas
and established it on the waters.

3 Who may ascend the mountain of the Lord?
Who may stand in his holy place?
4 The one who has clean hands and a pure heart,
who does not trust in an idol
or swear by a false god.

5 They will receive blessing from the Lord
and vindication from God their Savior.
6 Such is the generation of those who seek him,
who seek your face, God of Jacob.

Have you ever met someone that left you awe-struck? Maybe a celebrity, a politician, someone larger than life. That’s how I felt when I met Enes, and I met him on his home turf, so to speak. My brother had won some competition and the prize was tickets to a Milwaukee Bucks game, and we got to take a picture at midcourt during the pre-game warmups. And that’s where I found myself face to face with Enes—260 lb of muscle standing 6 feet and ten inches. I suppose I found myself face to bellybutton with Enes, Enes Kanter. I was awestruck at the sheer power and speed and his size! So who would it be for you? Shaking hands with the commander-in-chief, who has the nuclear launch codes? Dinner with Jeff Bezos who has made enough money to buy every NFL franchise? Or maybe seeing Cristiano Ronaldo, because when he posts a new picture on Instagram, 200 million people see it.

That moment, of meeting an amazingly powerful person, that’s what Psalm 24 is all about. And that meeting, is coming soon. That’s why today we’re starting our advent series: Coming Soon! This week, coming soon is the King of Glory. According to this psalm, this is a meeting to be excited about. There’s a hymn about the King of Glory that captures the mood of excitement, and it just might get stuck in your head. “The King of Glory comes the nation rejoices.”

He’s Got the Whole World in his Hands 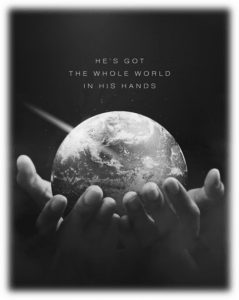 But then there are also some less abstract reasons to be excited about meeting the Lord. He is mighty in battle. There are a few very special soldiers in the Bible who are called “mighty,” but we don’t often talk about them in sermons. These mighty men served as King David’s secret service. Their stories are written in 2 Samuel 23. For instance, Eleazar was a mighty man braver than any superhero. Here’s his highlight reel. “As one of the three mighty warriors, he was with David when they taunted the Philistines gathered at Pas Dammim for battle. Then the Israelites retreated, 10 but Eleazar stood his ground and struck down the Philistines till his hand grew tired and froze to the sword. The Lord brought about a great victory that day.” (2 Samuel 23:9-10) The whole army retreats, but Eleazar wins single handedly. So imagine the moment when the army returns. If Eleazar is like, “Where’d you guys go? Well, anyway, I took care of this army.” Would you not be awe-struck to meet that guy? That’s what it’s like to meet a mighty man. 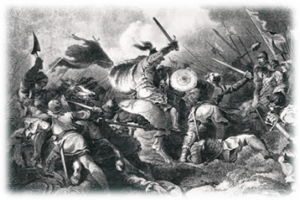 So how much more would it be to meet “the Lord, strong and mighty, the Lord mighty in battle.” (Psalm 24:8) The Lord can handle a lot more than an enemy army. He’s done it before. When everyone was making a mess of God’s creation, putting his salvation plan in danger, the Lord strong and mighty stepped in. “So the Lord said, ‘I will wipe from the face of the earth the human race I have created—and with them the animals, the birds and the creatures that move along the ground—for I regret that I have made them.’” (Genesis 6:11) God could completely destroy the world if he wanted to. He is mighty enough. But he didn’t. You see God’s solution to evil of this world, was not to destroy the world. It was to destroy evil, to provide an antidote to sin, and death. And Noah’s descendant Jesus did just that. It’s a mighty thing to defeat an enemy army, but it’s mightier to defeat a world of evil, but the mightiest thing of all is when Jesus destroyed death. His hand wasn’t frozen to a sword it was pinned to a board. He didn’t grow tired to rescue a nation, he died to rescue the world.

That is a glorious rescue. That is the king of glory, who has purchased with his blood the whole world and he now holds everything in his pierced hands. And this is the psalm about meeting him. Can you?

Are You Prepared to Meet The Lord?

“Who may ascend the mountain of the Lord? Who may stand in his holy place? The one who has clean hands and a pure heart, who does not trust in an idol or swear by a false god.” (Psalm 24:3-4) God is pretty clear about who he wants in his space. You got to have clean hands, something we’ve been thinking about these days. What would happen if you walk into an appointment, cough into your hand and then go for the handshake? Nobody wants your germs. And neither does God. Every time we use our hands to hurt it’s like sneezing right on them, and you’ve got a meeting with the King of Glory, he’s coming soon! But God also demands a pure heart. Even if you use your hands to do something kind and beautiful, but in your heart you’re seeking praise for yourself, it’s like you wiped your nose. But God’s requirements go beyond momentary actions. He wants someone who does not trust in an idol. A different translation would be “someone who does not offer their life to something pointless.” Even if moment by moment you catch yourself and correct your wrongs, how many of us are offering our lives, not in the service of the King of Glory, but to enhance our own reputation? How many of us spend the bulk of our free time not in service but on entertainment? How many of us, our whole lives revolve around not the coming king, but around our family?

So imagine your hand dripping with all your transgressions, extended to greet the King of Glory, whose hands hold the entire world, whose hands could destroy you in an instant, whose hands are marked with one distinctive battle scar, a hole through the middle, and who demands clean hands and pure hearts.

What I’m describing with germs and hands is a metaphor from Psalm 24, but Jesus describes a very real day when suddenly the King of Glory will arrive unannounced. “Be on guard! Be alert! You do not know when that time will come.” (Mark 13:33) The King of Glory is coming soon. Are you prepared to meet him? 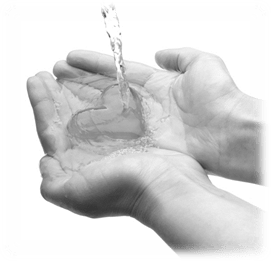 This is every person’s dilemma: we want to be with the King of Glory, but we are not clean enough. And this is where so many people hang their heads in shame or abandon meeting with God. We know we are not clean. We know he expects us to be clean. But guess what God does with unclean hands. He washes them. Of course, I’m not talking literally. I’m talking like Peter said it, “Baptism now saves you also—not the removal of dirt from the body but the pledge of a clear conscience toward God.” (1 Peter 3:21) Did you see what that says? Baptism saves you. When a little baby comes up here to be baptized, she looks all clean and pretty on the outside, but inside she is just crawling with sin, totally unfit to meet the King of Glory. That’s how all of us were when we were born, and that’s how many of us feel still today. But God washes unclean hands. Think of it, the King of Glory who swept away a world of evil in the flood, who confronted sin and death when he died on the cross, the King of Glory who’s got the whole world in his hands, do you think he can’t handle your dirt? He can. He’s promised to bless you! “They will receive blessing from the Lord and vindication from God their Savior. Such is the generation of those who seek him, who seek your face, God of Jacob.” (Psalm 24:5-6)

Lift Up Your Heads

The King of Glory is coming soon, and he can make us clean. But God will not force his soap on us. This terrifying battle warrior wants us, with our timid hearts, to let him in. He says, “Lift up your heads, O you gates! Be lifted up you ancient doors, that the King of Glory may come in.” (Psalm 24:8)

So what God does is brilliant, absolutely genius. He announces his coming. First with his word, but then with glorious angels shouting his praises. He gathers together kings and poor people, the powerful and the lowly and every knee bows before him. And at the center of this worship and singing and praise, is the King of Glory who could strike fear into the heart of every human, and he appears as… a baby. While the shepherds were terrified at the glory of the Lord shining with the angels, they did not hide their faces when they met the King of Glory. Mary and Joseph and wise men all took their turns cowering before angels, but when they met the King of Glory, they could lift up their heads. Babies may not have many powers, but this one they do: they can win a spot in your heart. Which is exactly what the Lord Jesus wants for you. Lift up your heads, open up your hearts this Advent, that the King of Glory may come in.

What the King of Glory did for the shepherds, he does for you too. Behold the great and mighty King of everything appears to you as… a book. Some words and sentences, which don’t always seem like much. But while your Bible may not seem all that powerful, it has this fabulous power: you will not react to this the way I did to Enes Kanter. There is no need to cower. The King of Glory comes to you in a way you can handle. So lift up your head, and pick up your Bible this Christmas season, that the King of Glory may come in, because, The King of Glory Comes! He’s coming soon.