7 You deceived me, LORD, and I was deceived; you overpowered me, and prevailed.
I am ridiculed all day long; everyone mocks me.
8 Whenever I speak, I cry out proclaiming violence and destruction.
So the word of the LORD has brought me insult and reproach all day long.
9 But if I say, “I will not mention his word or speak anymore in his name,”
his word is in my heart like a fire, a fire shut up in my bones.
I am weary of holding it in; indeed, I cannot.
10 I hear many whispering, “Terror on every side! Denounce him! Let’s denounce him!”
All my friends are waiting for me to slip, saying, “Perhaps he will be deceived; then we will prevail over him and take our revenge on him. “
11 But the LORD is with me like a mighty warrior;
So my persecutors will stumble and not prevail. They will fail and be thoroughly disgraced; their dishonor will never be forgotten.
12 LORD Almighty, you who examine the righteous and probe the heart and mind,
let me see your vengeance on them, for to you I have committed my cause.
13 Sing to the LORD! Give praise to the LORD!
He rescues the life of the needy from the hands of the wicked.

Some versions of the Bible have headings above sections, so you know what to call them. Those headings are not part of the original text. They are put in there by the publishers to help us understand what we are reading. The New International Version of the Bible calls this section “Jeremiah’s Complaint.” That seems about right. So, why was Jeremiah complaining?

Well, Jeremiah did everything exactly as God wanted, but his life was like a horror movie. About 2,600 years ago, God told Jeremiah to be a prophet. He was God’s preacher to the people in Jerusalem, and the sermon was terrible news. I’m using my imagination here to think of how God gave instructions: “Jeremiah, you know how the people of Jerusalem trust in wooden idols, but they don’t trust me?” “Yeah.” “And you know how they always take advantage of the poor?” “Yeah.” “And you know how they are all self-righteous and holier-than-thou?” “Yeah.” “Well, if they keep that up, they are headed to hell in a handbasket. So, here’s what you tell them: ‘If you don’t turn it around a foreign nation is going to surround Jerusalem, everyone will starve, and then they’ll burn it to the ground.’ That’s the message. Go tell them.” And Jeremiah did. This did not go well for Jeremiah.

For example, one time, God told him to buy a clay jar. Then gather the political leaders and the priests of God and preach. “This is what the Lord Almighty, the God of Israel, says: Listen! I am going to bring a disaster on this place that will make the ears of everyone who hears of it tingle. For they have forsaken me and made this a place of foreign gods.” (Jeremiah 19:3) Then God said, “Break the jar while those who go with you are watching, and say to them, ‘This is what the Lord Almighty says: I will smash this nation and this city just as this potter’s jar is smashed and cannot be repaired.” (Jeremiah 19:10)

Jeremiah did exactly what God wanted. And everyone hated him. The priest of God, who is supposed to be on Jeremiah’s side, he seized God’s prophet, had him publicly beaten, and put in stocks overnight. The next morning can you guess what happened? Jeremiah’s complaint. No wonder he complained. He had open wounds on his back, bruises on his wrists. “’Be a prophet of the Lord,’ they said. ‘It will be fun,’ they said. It’s not fun! It’s like a horror movie. “You deceived me, Lord, and I was deceived!” (Jeremiah 20:7) No wonder Jeremiah complained, he had every right to complain. Or did he?

Jesus said that if the world hates God, you can be sure it will hate people who do what God wants. “If the head of the house has been called Beelzebul, 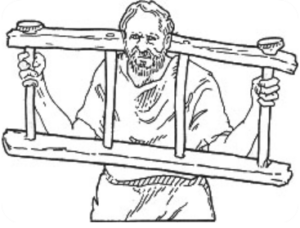 how much more the members of his household!” (Matthew 10:25) But that’s no reason to complain. Jesus also said, “Blessed are you when people insult you, persecute you and falsely say all kinds of evil against you because of me. Rejoice and be glad, because great is your reward in heaven.” (Matthew 5:11-12)

Compare Jeremiah’s complaint, with the Apostle Paul. God called Paul to be a preacher, just like Jeremiah. And Paul did exactly what God wanted too. And Paul’s life was something like a horror movie too. One time he was traveling in the ancient Greek city of Philippi, and he cured a young girl who was possessed by a demon. This did not go well for Paul. The people dragged him downtown, a mob gathered, they stripped him naked, beat him publicly, and put him in stocks. And in the middle of the night, there was a sound coming from Paul’s jail cell. He was not complaining. He was singing. Years later, Paul would write a letter back to the people of Philippi, “Rejoice in the Lord always; I will say it again: Rejoice!” (Philippians 4:4) That night in jail, Paul practiced what he preached.

The point is, what comes out of your mouth when being a Christian costs you? Do you complain? Do you rage on Facebook? Do you wring your hands about how the world is getting worse? When you stand in the atrium and talk about the sin in the world, do you complain? When our reaction to suffering is to complain, we are just as far from Jesus’ words as Jeremiah was. I’m in no position to throw stones here. I must confess that I complain more than my fair share.

But, you know, not every Bible labels this “Jeremiah’s Complaint.” If the Bible version you use is the Evangelical Heritage Version, you’ll see the heading called “Jeremiah’s Confession.”

The word “confession” means to take the cover off of your heart so that God can see inside. Of course, he can see in there anyway, but it’s healthy to uncover willingly. Isn’t that what Jeremiah’s doing here? When he said, “You deceived me, Lord!” He’s not hiding anything. When he said, “I will not mention his word or speak anymore in his name,” he’s not holding anything back, but he’s not proud of it. He said, “Lord Almighty, you who examine the righteous and probe the heart and mind, let me see your vengeance on them, for to you I have committed my cause.” (Jeremiah 20:12) That last line, “to you I have committed my cause,” another translation would be, “to you I have uncovered my complaint.”

It’s right for you and for me to uncover the heart. “God, I get frustrated with all the craziness in this world, and I take it out on all the wrong people. God, when you let me suffer, I’m so far from rejoicing. I’m sorry about all the complaining.”

Do you know what the Lord does with complaining Christians? He stands by them. As Jeremiah put it, “But the LORD is with me like a mighty warrior.” (Jeremiah 20:11) The word that is translated “mighty” in this passage, this is the only time in the whole Bible that it’s used for a good guy. In every other passage, it’s for bad guys- a ruthless warrior, or a terrifying enemy. But here, it’s the Lord who is mighty. Do you see what it’s saying? Picture the worst thing you’re facing in your life. Is it pain? Sickness? Hatred? Recession? Persecution? No matter who your enemy is, the Lord is bigger and badder, and he’s standing by you. Yes, even you, even if you have joined Jeremiah in grumbling.

The Lord has already taken on the worst this world has to offer. When Jesus came to this earth, he went toe to toe with haters, and with Satan, and with death itself. And you know how that ended. Jesus took on the worst of this world and defeated it, so that he could say, “In this world, you will have trouble. But take heart. I have overcome the world.” (John 16:33)

When Jeremiah took the cover off his heart, what was inside was more than just sin. He also confessed his trust in the God, who was with him through all his suffering. That truth, that confession is what pulled him out of his complaining so he could say, “Sing to the LORD! Give praise to the LORD! He rescues the life of the needy from the hands of the wicked.” (Jeremiah 20:13) Look at Jeremiah, singing to the Lord, just like the Apostle Paul! It’s pretty amazing what God can accomplish in a broken heart.

The New International Version calls this complaint. The Evangelical Heritage Version calls this a confession. It’s both. It’s the complicated internal thoughts of a man who was suffering for his faith. Maybe the next time you’re suffering, you’ll start with a complaint. But then remember Jeremiah. Even more, remember Jeremiah’s Lord, the terrible warrior who has conquered evil and promises to stand by you to the end, no matter what it costs you. With the mighty warrior by your side, you just might find yourself singing to the Lord, praising the Lord. After all, he rescues the life of the needy from the hands of the wicked.