GOD MAKES US A FAMILY GROWING IN CHRIST

It is unsettling to be a stranger. I remember standing in Hangzhou, China, in the middle of a long alleyway packed with thousands of people. My family and I were visiting my sister who lived there, but they were waiting for me at the end of the ally. And in a sea of ten thousand people, I was alone. I was the only person over 5’6”, the only one with blonde hair, the only one who didn’t speak Mandarin. I was the weirdo, the stranger, and it was lonely and unsettling.

Martin Heidegger had a German word for that, Unheimlich. It means “not like at home.” You’ve felt that. If you’ve ever traveled to a foreign country or found yourself in the wrong cheering section, when you have to take a shower at someone else’s house, and you think, “this is not like at home.” That’s Unheimlich, where everything is a little off.

Jim Morrison wrote a song for The Doors that captures that idea.

“People are strange when you’re a stranger.

Streets are uneven when you’re down.”[1]

He says when you’re a stranger, something doesn’t feel right.

Jim Morrison cited as one of his influences the existential philosopher Albert Camus. Camus thought the experience of being a stranger was much more universal than traveling to a foreign country. He wrote,

“The feeling is common to all of us. For most men, the approach of dinner, the arrival of a letter, or a smile from a passing girl are enough to help them get around it. But the man who likes to dig into ideas finds that… the whole of one’s being can be overcome with disgust.”[2]

Camus says that we all know something’s not right, and most people can ignore it by focusing on dinner or news or a smile. But people who think about it know something is wrong. This is why you know people who have everything they could want, a house, a family, plenty to eat, and yet they’re not satisfied.

The Bible says that we all know the feeling of being a stranger because we have been estranged from God. God made us to live with him, but our wrongdoing has separated us. It’s like God has one culture of holiness and our sin makes us different from him. That sits in our souls, and we know it’s not right. Sin is why you can have all the toys you ever dreamed of, a good job, and people who love you, and still, something feels off. It’s because you’re strange to God.

But God can do something about that.

GOD MAKES US A FAMILY

GOD MAKES US A FAMILY GROWING IN CHRIST

When I was in that ally in China, do you know when my heart rate finally came down? When I found my family. And that’s what’s happened to you. God makes us a family.

He said so in Ephesians chapter 2. God wrote this to a congregation just like us. They trusted in Jesus, but sometimes they felt estranged. God comforts them by comparing them to three different things. You are like citizens of a nation. You are like a family. You are like a building. Listen for the three illustrations.

19 Consequently, you are no longer foreigners and strangers, but fellow citizens with God’s people and also members of his household, 20 built on the foundation of the apostles and prophets, with Christ Jesus himself as the chief cornerstone. 21 In him the whole building is joined together and rises to become a holy temple in the Lord. 22 And in him you too are being built together to become a dwelling in which God lives by his Spirit.

If you are a fellow citizen, you live in the same country, but brothers and sisters live not miles away but just feet from one another. And if you are a group of bricks in a building, there is no space between you at all. See how deeply he says we are connected to each other?

But we are also close to God. If we are a nation, God is our King. He’s a good one, but citizens are not usually that close with the ruler. But this King is also our Father, who lives down the hall, ready to respond to your smallest needs. And if we are a temple, God doesn’t live down the hall. He lives in us, and he knows our needs before we even ask.

All those illustrations show that we are connected. When I made it out of the alley in China and back to my family, I saw people my height, with my hair color, who were like me. But in this room, I see people who are different. Our congregation has people who look different, speak different native languages, vote differently, think about coronavirus differently.

That connection to the same God is so deep that it affects the deep-down strangeness everyone feels. It’s so deep that it lasts forever. Two billion years from now, you will be feasting in heaven with these people. Which means that your relationships with these people are the deepest, most profound relationships in your life—we’re family. No matter how different another Christian’s viewpoint is from yours, you’ll give them a ride to the airport; you’ll have them with dinner; you’ll support them with a xenophilia—because that’s what family does.

In 1765 John Fawcett was called to a little country church in the North of England at Wainsgate. They paid him a small salary but promised him and his family they’d donate enough potatoes to survive. Well, the Fawcett family fell in love with those strangers. And then, they got a letter inviting John to be the preacher at the most prestigious Baptist church in London. And he accepted. He preached his farewell sermon, loaded up the wagons, and the whole congregation gathered on the lawn to thank him for his service and cry a while. Pastor Fawcett looked at the wagon master, ready to crack the whip and move out, and he said, “Unload the wagons. We’re staying.” Legend has it, that after all the hugs and celebration, he went into his study and wrote the hymn you heard earlier, “Blessed be the tie that binds our hearts in Christian love. The fellowship of kindred minds is like to that above.”[4] 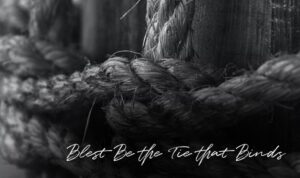 Of course, it’s possible you don’t feel that way. It could be that some of you walk into church and say, I don’t feel connected to these people—especially not the weird ones. There are times when that I think that way.

WE ARE A GROWING IN CHRIST

How do we see our congregation as it relates to Jesus? Imagine we crowded into a big time machine and traveled back 2000 years. Do you know what we would see there? Radical hospitality, xenophilia. Hospitality is always expensive, you know, the sacrifices you make to welcome others into your home. But nothing is as costly as the hospitality Jesus showed.

He left his perfect home where everything was exactly as it should be—it’s called heaven. And he came here. Do you remember the name of his house on earth? Good answer. He was homeless. Talk about Unheimlich! That means “not like at home,” and Jesus experienced an earthly life that was nothing like his home in heaven. He became estranged from his heavenly Father so that you and I could be adopted in.

And if our whole congregation joined the crowds that followed Jesus, we would see him arrested, condemned, and crucified outside the city wall. He was alone in life and alone in death. His Father turned his back on Jesus as he died on the cross.

Why? Why did Jesus become a stranger here? Why did he die such a lonely death? It was payback for all the sin that separated us from God—not just you, not just me, all of us. And as a result, all of us are accepted into God’s family, in Jesus’ place. That’s the cost of Jesus’ radical hospitality.

So what would happen to our relationship at the foot of that cross? If we all stood in a circle around the dying Son of God, knowing that his unthinkable sacrifice was making all of us sons and daughters of God, in that moment, how would we look at each other? Probably the way refugees look at each other. You may have a different background, different hometown, different opinions, but both of us were in that mess, and both of us made it out.

When we gather here, we do stand at the foot of this cross. And we do confess our sins which separate us from God. And we do hear that one Jesus died and rose to save all of us.

Oh, we’re family. God has made us a family by connecting us in Jesus’ bloodlines. And the more we see each other in the light of what Jesus has done, the more we’ll experience that family.

I’m going to give you four practical ways to experience our family in all its glory. This is really where the rubber meets the road of being a Christian congregation.

Come back for the next four weeks. Or, if you’re not able to be here, stream it live. Go back and watch each sermon later on YouTube or Facebook. But come back the next four weeks as we celebrate and learn what our family is all about. Because God has made us a family growing in Christ.

[3] For this and other insights within this sermon, I am indebted to Pastor Tim Keller.