43 The next day Jesus decided to leave for Galilee. Finding Philip, he said to him, “Follow me.”
44 Philip, like Andrew and Peter, was from the town of Bethsaida. 45 Philip found Nathanael and told him, “We have found the one Moses wrote about in the Law, and about whom the prophets also wrote—Jesus of Nazareth, the son of Joseph.”
46 “Nazareth! Can anything good come from there?” Nathanael asked.
“Come and see,” said Philip.
47 When Jesus saw Nathanael approaching, he said of him, “Here truly is an Israelite in whom there is no deceit.”
48 “How do you know me?” Nathanael asked.
Jesus answered, “I saw you while you were still under the fig tree before Philip called you.”
49 Then Nathanael declared, “Rabbi, you are the Son of God; you are the king of Israel.”
50 Jesus said, “You believe because I told you I saw you under the fig tree. You will see greater things than that.” 51 He then added, “Very truly I tell you, you will see ‘heaven open, and the angels of God ascending and descending on’ the Son of Man.”

I’m skeptical about Jesus. What does that mean? Nowadays, if you hear someone called a skeptic, it probably means they have lots of doubts or are difficult to convince.  A skeptic is looking for reasons to doubt. Probably all of us are skeptical of something. But there’s an old-school definition of the word “skeptic,” too. The term comes from the ancient Greek word skeptesthai, which means “to look.” That’s why 100 years ago, a Spanish professor said, “Skeptic does not mean him who doubts, but him who investigates or researches as opposed to him who asserts and thinks that he has found.”[1] In that way, it’s a synonym for “research,” someone who looks into things. In that way, I can think of nothing better than being skeptical about Jesus—that is, researching and learning more about Jesus. Let me say it another way:

In the Gospel for today, from John 1, we met two disciples who look into Jesus, Philip, and Nathanael. First, Jesus finds Philip. “Finding Philip, he said to him, ‘Follow me.’” And Phillip followed. But Philip also did his research. His research was comparing Jesus to what God had promised hundreds of years before in the Old Testament. Moses wrote that God would send a prophet. The prophet Isaiah said he would be born of a virgin. The prophet Micah said he would come from Bethlehem. Based on Philip’s research, Jesus checked all the boxes. So he had to tell his friend.

“Philip found Nathanael and told him, ‘We have found the one Moses wrote about in the Law, and about whom the prophets also wrote—Jesus of Nazareth, the son of Joseph.’” (John 1:45) And Nathanael was skeptical. I can imagine his face. “Moses wrote about him? Cool. And the prophets also wrote about him? Great! Jesus? Sounds like a good name. From Nazareth? Wait.” But I don’t have to imagine what he said, “Nazareth! Can anything good come from there?” Not the nicest thing to say about a guy’s home town.

Nathanael was skeptical. And Philip doesn’t scold him. He doesn’t say, “Just believe me!” He invites his friend to do what open-minded skeptics do—look into it. Do you remember Philip’s brilliant response? “Come and see.”

But this is where the story gets exciting. When you look into Jesus, you find out that Jesus looks into you.

JESUS LOOKS INTO YOU

Nathanael found that out very quickly. “When Jesus saw Nathanael approaching, he said of him, ‘Here truly is an Israelite in whom there is no deceit.’ ‘How do you know me?’ Nathanael asked. Jesus answered, ‘I saw you while you were still under the fig tree before Philip called you.’ Nathanael comes planning to look into Jesus. But before they even arrive, Jesus looks into Nathanael, right into his heart.  Jesus knows things about Nathanael. Jesus knows that he has no deceit in him. And when Nathanael asked, “How?” Jesus says, “I saw.” And then Jesus gives him proof, “I know you were under that fig tree.”

If you were Nathanael, what would you be thinking? “Woah! How did he know about the fig tree—Uh-oh! Does that mean he knows what I said about his hometown?” Yeah, it can be kind of scary when Jesus looks into you.

There’s a technical term for this. It’s called “social penetration theory.”[2] It says that over time, as you get close with someone, you let them see more of your thoughts, feelings, dreams, fears. That’s what it means to become friends. But it takes time. With people we don’t know, we wear what they call a social mask. Your social mask is all the things you do and say because you want people to perceive you in a certain way. And that’s a good thing. Imagine if you told your most profound regret to every cashier. So you show them your polite face, your social mask, and you save your deeper things for those closest to you. There may be some things that you don’t tell anybody. 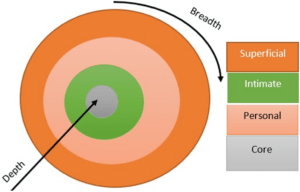 But Jesus can see through social masks. You don’t reveal your inner-most thoughts to him over time. He sees them immediately. He sees past your actions and your words, and he sees into your heart, just like he did to Nathanael. It’s a bit unsettling.

But this is the thing many skeptics admire about the Bible. It speaks right to the heart of things. You see, everybody knows, “Don’t murder.” But the Bible sees past your actions right into your heart. “Anyone who hates his brother is a murderer.” (1 John 3:15) Most people know it’s wrong to cheat on your wife or your girlfriend, but Jesus goes past your actions right to your heart, “anyone who looks at a woman lustfully has already committed adultery with her in his heart.” (Matthew 5:28)

So put yourself in Nathanael’s shoes. You thought you were going to look into Jesus. It turns out he can look into you. What from your heart is he going to bring up?

That feeling certainly got Nathanael’s attention. “Nathanael declared, ‘Rabbi, you are the Son of God; you are the king of Israel.’” (John 1:49) That’s exactly right. Jesus is exceptional. And often, when skeptics look into Jesus, that is the thing that first grabs their attention—his exceptional power, his exceptional knowledge, his moral clarity. That’s what Philip wanted Nathanael to see when he invited him to come and see Jesus. But Jesus would show Nathanael even more.

YOU’LL FIND MORE THAN YOU WERE LOOKING FOR

Nathanael was amazed that Jesus saw him under the fig tree and saw into his heart. “Jesus said, ‘You believe because I told you I saw you under the fig tree. You will see greater things than that.’” (John 1:50) If you have already looked into Jesus’ story, you know some of the things Nathanael got to see. He saw a wild man, more than mentally ill, spiritually ill, cutting himself and tearing off handcuffs, terrorizing a city. And he saw Jesus tell that man’s demons to be gone, and they were. He saw the grave of a dead man, decomposing for four days. And he saw Jesus say, “Lazarus, come out.” (John 11:43) And the dead man did, good as new.

But then Nathanael saw a greater thing than that.

[3]He saw Jesus heal the world—not the outward actions of people, not just the diseases. Jesus saw right into the heart of everyone, and he saw all the regret and all the guilt. And Jesus wanted those people, you and me too, to be his followers, to live with him, even forever in heaven. But he said, “Not like that. Not with all your guilt and shame and sinful hearts. I don’t want that to be your eternity.” So he did something about it. He knows how messed up you are in your heart; he can look into you. And knowing all of that, he chose to take responsibility for it. Which also means he took the punishment for it. And Nathanael saw it. He saw Jesus arrested as an innocent man. He saw him beaten, not for anything he had done wrong. Nathanael would live to see Jesus die for Nathanael’s sins, for my sins, for yours. 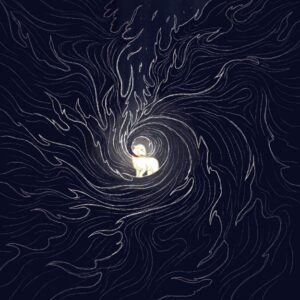 Jesus had removed everything embarrassing from Nathanael’s record. So when Jesus looked into Nathanael’s heart, he did not say, “Why would you insult Nazareth?” He said, “This man has no deceit.” That’s grace. What would Jesus, in his grace, say about you? “This man has no sin.” “This woman is my perfect child. I made it so.” Nathanael saw Jesus risen from the dead to guarantee it.

There was once a man who probably figured God could not love him. He had ruined his family. Stolen from them, lied, burned every bridge. And so he found himself in the prime of his life, homeless. You can feel sorry for yourself even if you know you’re the one responsible. And then one night, God came to him. Would he scold him? Kill him? No. God extended a ladder, with one end firmly planted on the earth and the other end resting against heaven. And continuously, angels were descending, descending, descending to help this man. Do you see what God’s saying? You can’t run away from me. I will be sending you help wherever you go. And then those angels were ascending, ascending, ascending, back to God. As if to say, “You have access to me. You have a home here in heaven.” By the end of the night, the man was still homeless. But not hopeless because God was with him.

[4]That man was the Old Testament hero Jacob. And Jacob’s ladder was famous in Israel. God will be with us on this earth, and we will be with God in heaven. So on the first day Nathanael is looking into Jesus, Jesus says, “Very truly I tell you, you will see ‘heaven open, and the angels of God ascending and descending on’ the Son of Man.” (John 1:51) I’m the ladder, Nathanael. I am God with you. And I am the way to heaven. 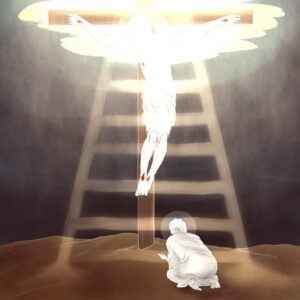 I don’t know if that’s what skeptics are looking for, but that’s what Nathanael found. And by God’s grace, that’s what you’ve seen in Jesus too. He has taken away your sins. He has opened heaven for you.

So here’s today’s encouragement, whether you already follow Jesus or if you’re brand new to him: Be a skeptic. By that, I mean, look into Jesus. Look in the Bible to see what he did. Think carefully about the creed we are about to say because it outlines the basic teachings about Jesus. Join Pastor Raasch on zoom at 9:15 this morning to learn more about the joy and confidence that comes from Jesus. Look into Jesus. And the more you appreciate what he’s done, the more you’ll want to invite your skeptical friends, “Come and see.”