Burst into songs of joy together, for the Lord has comforted his people. The Lord will lay bare his holy arm in the sight of all the nations, and all the ends of the earth will see the salvation of our God. (Is. 52:9-10)

Our sermon today is based on the story of Simeon from Luke chapter 2. As you read it, look for all the references to seeing.

25Now there was a man in Jerusalem called Simeon, who was righteous and devout. He was waiting for the consolation of Israel, and the Holy Spirit was on him. 26It had been revealed to him by the Holy Spirit that he would not see death before he had seen the Lord’s Messiah.

27Moved by the Spirit, he went into the temple courts. When the parents brought in the child Jesus to do for him what the custom of the Law required, 28Simeon took him in his arms and praised God, saying:

29“Sovereign Lord, as you have promised, you may now dismiss your servant in peace.

30For my eyes have seen your salvation,

31which you have prepared in the sight of all nations:

32a light for revelation to the Gentiles, and the glory of your people Israel.”

33The child’s father and mother marveled at what was said about him.

34Then Simeon blessed them and said to Mary, his mother: “This child is destined to cause the falling and rising of many in Israel, and to be a sign that will be spoken against, 35so that the thoughts of many hearts will be revealed.”

Sometimes What You See Tells You More about You

Sometimes looking at something tells you less about the thing you see and more about the person who’s seeing it. That’s the idea behind psychiatric inkblot tests like this one. What do you see? Some people see human faces. Some see animals. And supposedly, a trained professional can learn about a patient from what they see. Of course, that doesn’t only happen in psychology. What do you see in this picture? I know some dog lovers see a puppy. But if you’re thinking about a vacation, maybe you see a cruise ship. Let’s do one more. What do you see in this picture? It’s a baby—cute. He’s being held and touched by some adults. And that’s what some people saw when Mary and Joseph brought their 40-day old baby to the temple. But Simeon saw more. So today, our goal is this:

I’ve always been a big fan of Simeon. The Bible tells us he “was righteous and devout.” (Luke 2:25) In today’s language, he was a good guy. He did the right thing. “He was waiting for the consolation of Israel.” (Luke 2:25) Maybe you remember that the ancient nation of Israel had fallen on some tough times. For 600 years before Jesus was born, they were invaded by one country after another. Assyria, Babylon, Persia, Greeks, then Romans. But God promised he would comfort his people, and Simeon believed God. So, he was waiting. Plus, the Bible says, “the Holy Spirit was on him. It had been revealed to him by the Holy Spirit that he would not see death before he had seen the Lord’s Messiah.” (Luke 2:25-26) But the reason I was a big fan of Simeon is because of what he saw in Jesus.

What Simeon Saw in Jesus 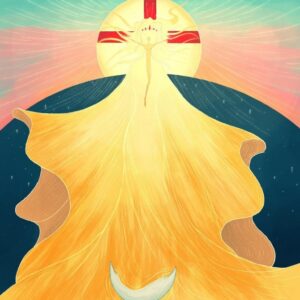 As people in the temple looked over Mary’s elbow, they could all see the baby’s squishy cheeks and his tiny fingernails. But Simeon grabbed him. And he started singing! Why? Because he saw more than a baby. “Lord, now you let your servant depart in peace according to your word.” Remember how Simeon was waiting for comfort? This is it! He says I can die in peace because what Israel needs, what we all need, is a Savior. And here he is. Do you know how long it took Jesus’ 12 disciples to figure that out? But Simeon saw it!”

“For my eyes have seen your salvation which you have prepared before the face of all people.” Everybody’s eyes could see the baby. But Simeon saw more. When Simeon looked at that baby, he saw the purpose for which he came. He would save us. Simeon was sure of it. I don’t know how many details Simeon knew. Did he realize that Jesus would do miracles? Did he know he would die on the cross? Did he know he would rise after three days? Well, this much Simeon knew—people like him, people like you and me, we have made a royal mess of this world. Collectively, we are responsible for all the grotesque evils in this world. And individually, each one of us has dirt to answer for. All those times we look out for ourselves instead of helping people in need. Every time we’ve looked down on someone worse than us or resented someone more successful. We would have a real bad time trying to come up with our own salvation. But Simeon saw God’s salvation. No matter what the details would be, the baby was the Savior.

And the last thing Simeon saw was this fascinating light image. “A light to lighten the Gentiles and the glory of your people Israel.” Let’s break that down: Simeon says the baby, who’s in Jerusalem, is a light. And he shines his light into other nations so that they can see. That’s what it means to be “enlightened.” You’re in the light, when before you were in the dark. For all sorts of Gentile nations, that is, non-Israelite nations, they did not know about a God who would save them from their sins. They were in the dark. How many of you have roots in darkened countries? I do. My heritage is from Northern Germany, where my ancestors would cut down a tree, burn half of a log and worship the other half. That’s exactly what Isaiah was talking about. “Ignorant are those who carry about idols of wood, who pray to gods that cannot save.” (Isaiah 45:20) A tree cannot save anybody. But then, God used a missionary to enlighten them, just like Simeon said. If your heritage isn’t Jewish, then that’s your story too. (By the way, this idea of Gentile nations being included in the Lord’s love, this was almost unthinkable in the first century AD. It blew the Apostle Paul’s mind when he thought of that. But Simeon got it. He saw it from the beginning.)

And when people from all over the world heard about Jesus, they turned their attention toward Jerusalem. Not because Israel had the best culture, and not because they were the most faithful people. If you read the stories of Israel’s history in the Old Testament, you’ll read plenty of embarrassing stories. No, the world is obsessed with Jerusalem because of Jesus. He is the bright light in Israel that enlightens nations and brings glory to Israel. Simeon saw that.

What Others Saw in Jesus

But not everybody saw what Simeon saw. The baby Jesus appeared like an ordinary baby. He grew up like a typical child. The Bible says he “grew and became strong; he was filled with wisdom, and the grace of God was on him.” (Luke 2:40) And when he grew up, he appeared like an ordinary man. One day when Jesus was teaching in his home town of Nazareth, the people said, “Isn’t this Joseph’s son?” (Luke 4:22) Ordinary baby, ordinary child (Luke 2:40). Yes, Jesus appeared familiar, which made some people doubt what Simeon saw in him.

And Simeon predicted that too. He told Mary, “This child is destined to cause the falling and rising of many in Israel and to be a sign that will be spoken against.” (Luke 2:34-35) How could Jesus cause somebody to fall? Well, that’s what happens when people see Jesus, but they don’t believe him. That’s what happened to wicked Herod. He was the governor of Jerusalem when Jesus was born, and when he found out about Jesus, what he saw as a threat. So he killed all the baby boys in Bethlehem. Those people from Nazareth saw Jesus teaching and said, “Isn’t this Joseph’s son?” Jesus wasn’t spectacular enough for them. They saw him as a disappointment, so they tried to throw him off a cliff. Even Jesus’ death on the cross caused people to stumble. You and I may wear crosses around our necks because we love what Jesus accomplished there, but many people consider the cross foolish. “If Jesus were so good, then why did they kill him like an outlaw?” Jesus won the hearts of some, but many people—by their own fault—stumble over him because he didn’t look extraordinary. 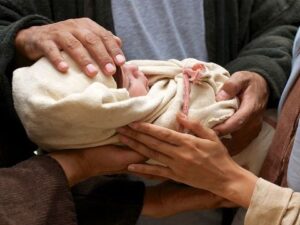 It’s easy to make too little of Jesus, to think his life and words are less important than they are. So how do you see what Simeon saw? How do you see Jesus for what he really is?

If I was Rafiki from the Lion King—remember he’s the witchdoctor monkey—I’d tell you to “Look harder.” That’s what he tells Simba when Simba can’t see who he truly is. Of course, I’m not an African witch doctor; the solution for you is not to strain your eyes to look at Jesus more intensely. Of course not.

But some people like to take that same idea and apply it to faith. As if the way to appreciate Jesus is just to faith harder, like focus on being incredibly trusting! But straining your heart to trust Jesus more is just as silly as straining your eyes.

Your ordinary method and your extraordinary miracle may be a little different from Simeon’s, but God still works in the same way. You probably don’t have an ancient scroll of the prophet Isaiah at home, but you’ve got a book, an app, Biblegateway.com. Those may seem like ordinary methods, but what has God told you: Faith comes from looking deep in your soul? No. From trusting harder? No. Faith comes from hearing the message, and the message is heard through the word about Christ. (Romans 10:17) And you’ve got the message in the Bible. And after that ordinary method comes an extraordinary miracle. You believe it.

By nature, you and I are blind to Jesus. We can’t see him for what he really is! “The god of this age has blinded the minds of unbelievers, so that they cannot see the light of the gospel.” (2 Corinthians 4:4) But God has opened blind eyes before. He’s enlightened the dark with miracles! “God, who said, “Let light shine out of darkness,” made his light shine in our hearts to give us the light of the knowledge of God’s glory displayed in the face of Christ.” (2 Corinthians 4:6)

Through his ordinary word, God has done an extraordinary miracle. He let you see what Simeon saw. So let’s do just a few more vision tests:

What Do You See? 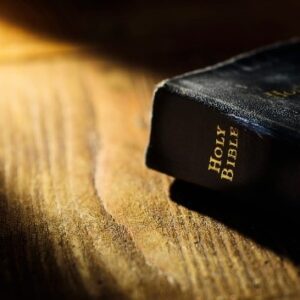 Many people see an irrelevant old book. But, miracle of miracles, you see God’s thoughts written down for you.

Some people see only water. But, God’s word has taught you to see your sins washed away.

It may appear to be just a snack. But, the Holy Spirit has convinced you to see evidence that Jesus loves you—he gave up his very body and blood for you.

Some see only bitterness. But you see the doorway to heaven, or as Simeon said, departing in peace.

A Christmas Miracle for You

There are a lot of Christmas miracles: a virgin gives birth, God becomes man. But this Christmas miracle breaks into your life day after day. It’s a miracle that by faith, you see what Simeon saw.